Whats The Collective Noun For A Lot Of Renault Twingos?

It’s not often, in fact its incredibly rare that two manufacturers release the same model at pretty much the same time. Obviously having two different versions of essentially the same car does create a bit of a marketing issue. But for us, it also creates a nice opportunity to do a nice head to head feature.

And with that in mind, we have Mk1 Renault Twingo models in 1:18 scale from both Norev and Solido.

It wasn’t really supposed to be the case that they arrived at the same time originally. Norev announced theirs as late 2019 releases and we first expected them last December. But, for whatever reason, it wasn’t to be and so firstly in late April we had an assortment of Norev Twingos and then mid May brought us Solidos offering to Twingo fans. Now you might expect that they are going to be pretty similar, wouldn’t you? And in that they are both models of the same car, you’d be right. But there’s an awful lot of differences too… 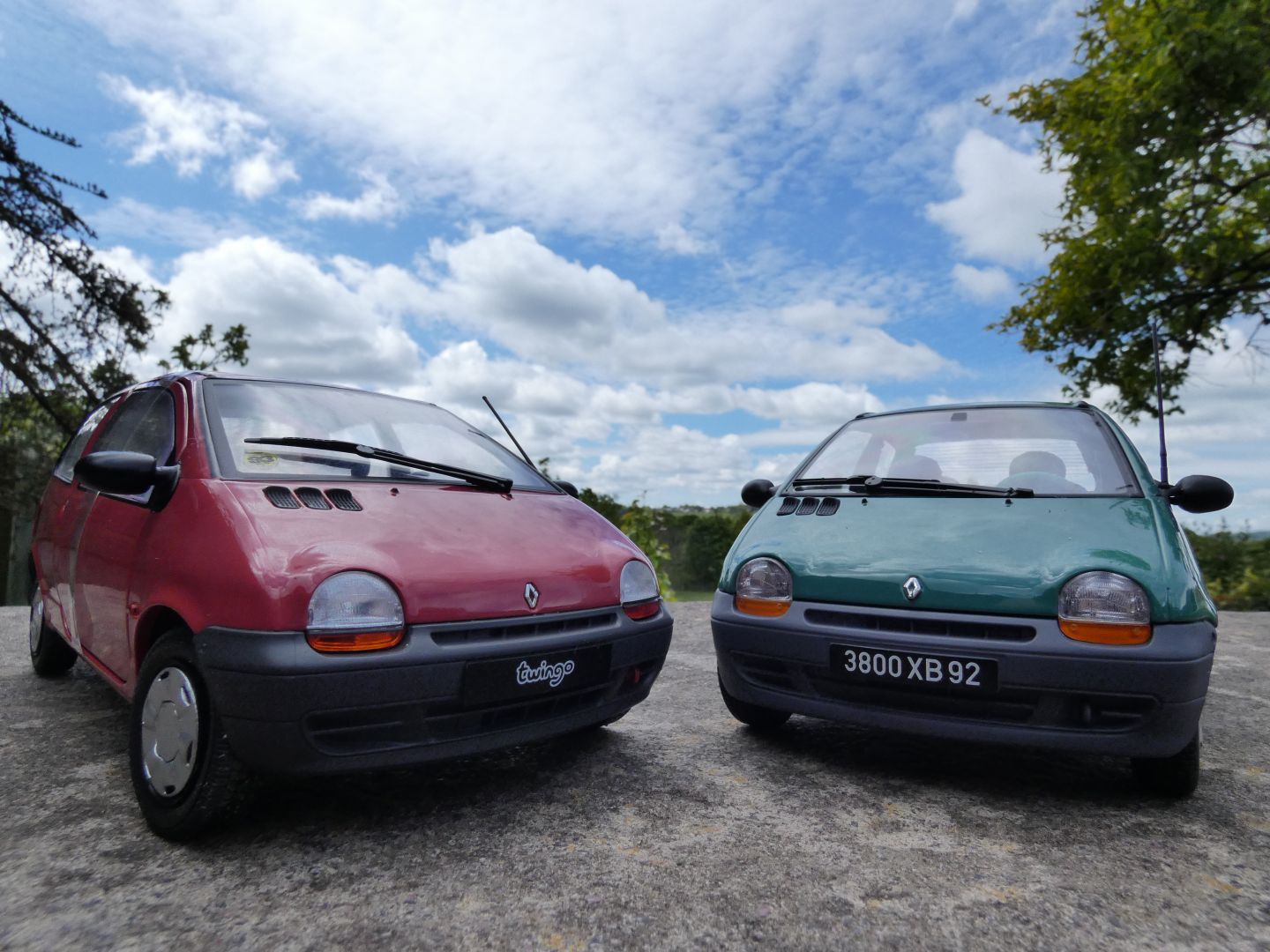 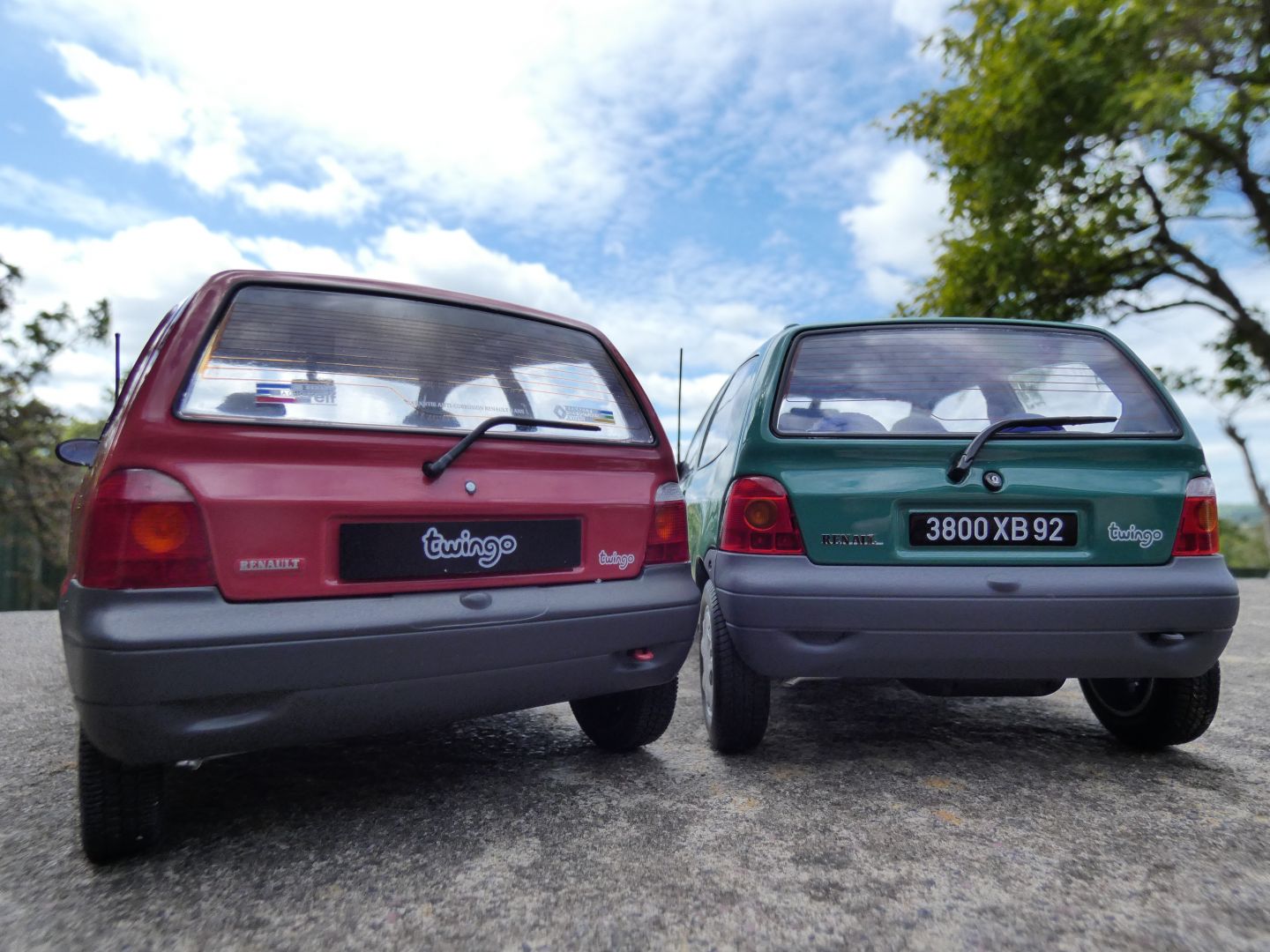 First impressions then, both are very nice models and capture the proportions of the real thing very well, most noticeably is that the Norev is a sealed bodyshell whereas the Solido has opening front doors. Both have pleasingly detailed interiors with the correct, and rather vivid Twingo specific upholstery though that vivid upholstery is just one part of the Twingos charm although on our 1:18 examples, Norev just about have the upper hand with a slightly more detailed interior with nicely detailed green steering wheel and switches. Its a close run thing though.

One thing that bothered me, albeit only slightly on the Norev model was that the wheeltrims just didn’t look quite right. Happily the Solido version has no such issue with the wheels on their version being spot on. One other detail we like is that the Solido Twingo features the Renault factory stickers in the rear windscreen as well as a French road tax vignette in the windscreen. I’m a big fan of details like this as it gives a little extra authenticity to the model, its something we’ve seen on other Solido models too recently with even stickers for car shows featuring which, to my mind at least, really adds a nice extra touch. And whilst we’re on the subject of stickers, Solido’s Twingos come with show plates with the Twingo logo such as you might find in a showroom but also an additional set of French registration plates to fit should you wish. If we’re being picky then the positioning of the radio aerial on the Solido model – canted back at an angle – isn’t quite right as it should sit nearer to up bolt upright as on the Norev version and the badges on the back of the Solido version are a little small but in fairness it’s hardly noticeable or an issue. 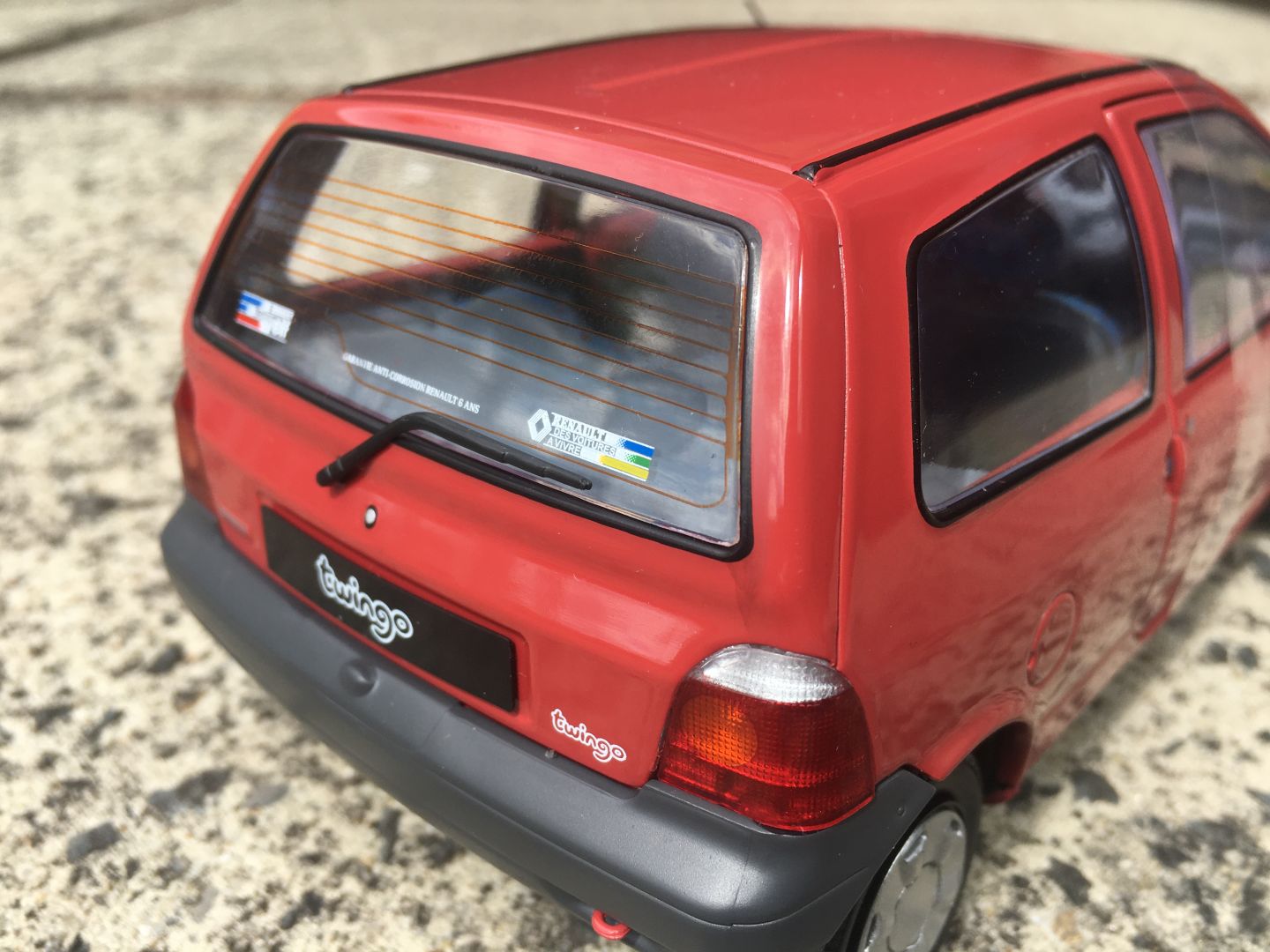 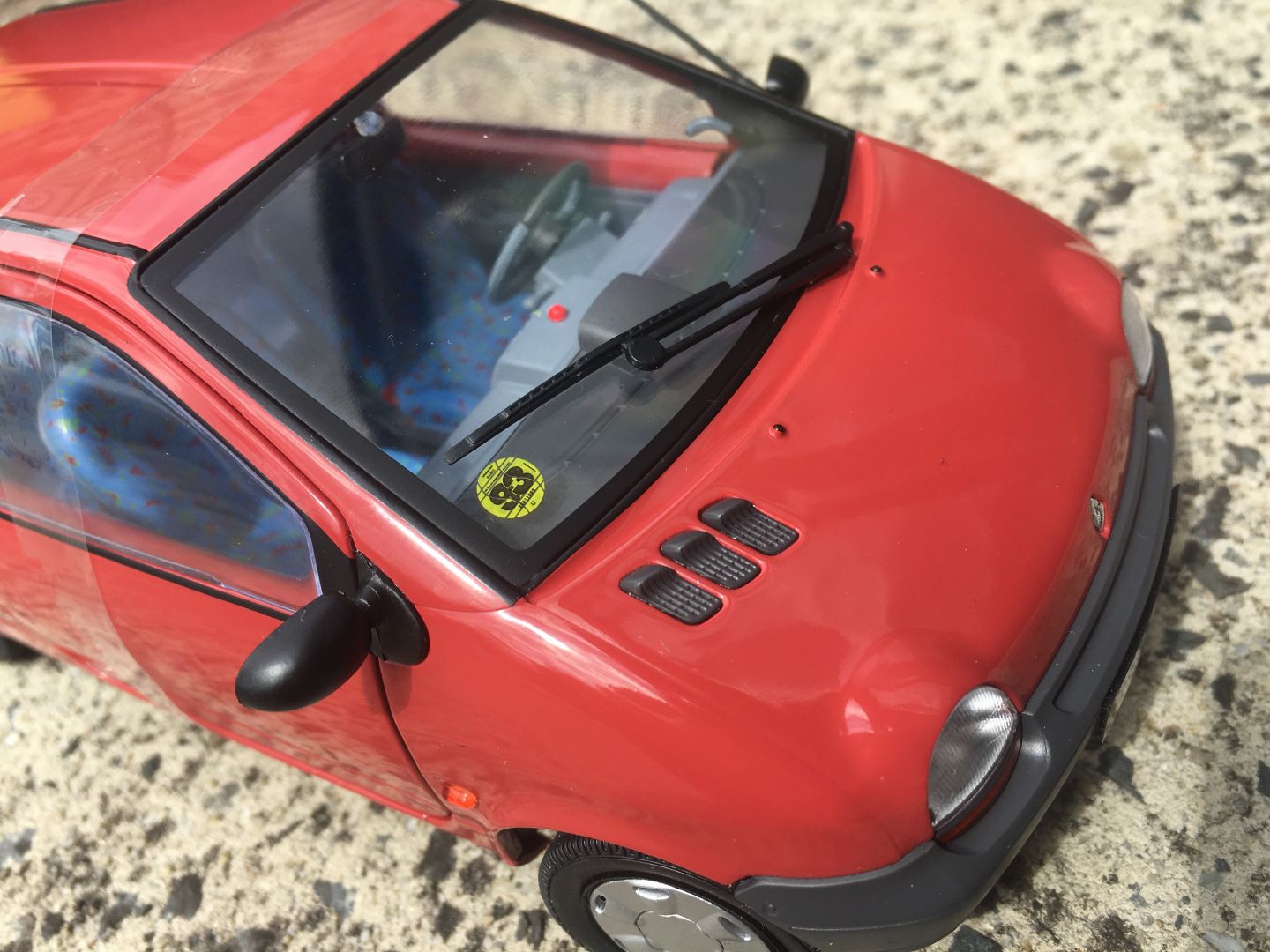 So which one is ‘best’? It’s difficult, if not impossible to draw a conclusion I think.

Both are very excellent models, are well detailed and capture the real thing very well. So it might well come down to how you feel about opening parts in the end, and this has long been a matter of debate for collectors which we won’t get into here. Both of the examples we’ve looked at – in fact every one we’ve currently got in stock – have faultless paint finishes, correctly applied graphics and everything as it should be and in fact we find that very rarely, if ever, do we have issues with any models from either manufacturer so it’s pretty much even on that score. The pricing does make a difference with the Solido version being significantly cheaper that the Norev models with the two being separated by around £20.

So if you want us to tell you which one is best, well we’ll have to disappoint you! They are both very nice and would be a nice addition to any collection or home of any Twingo enthusiast. You can find them in stock, in our store on the following links; for the Norev versions click here and the Solido Twingos (Twingii?) click here! 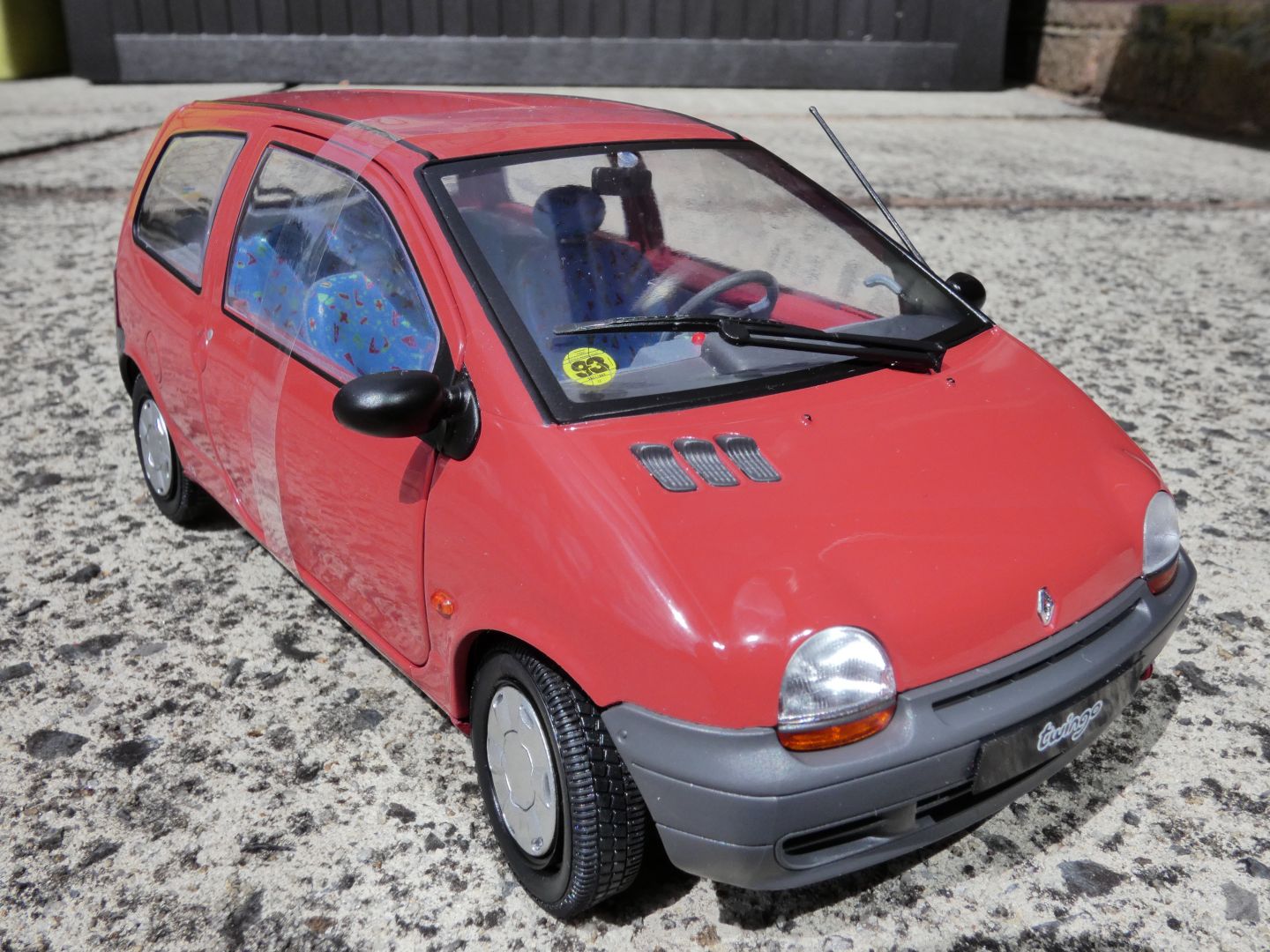 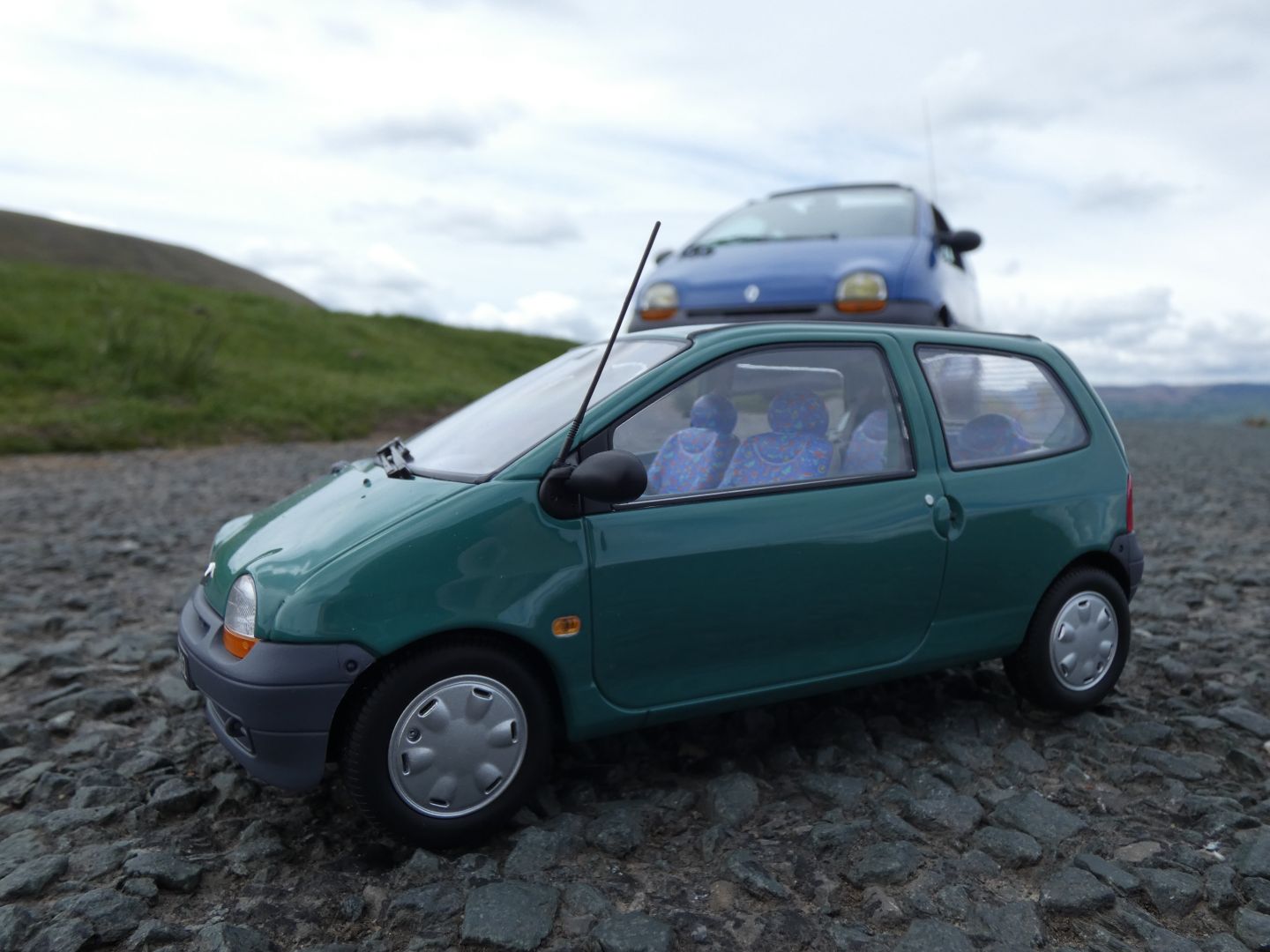